This is a partner post published in association with Enecuum

Everyone knows the back story: Satoshi Nakamoto proposed Bitcoin as a decentralized payment system. During its early days, the system worked as expected. However, Bitcoin started to face problems with scalability and decentralization as the number of users increased. Today, crypto enthusiasts are actively searching for solutions to some of the challenges faced by Bitcoin’s network in recent years, actively searching for solutions to these challenges.

In 2017, the Enecuum project announced its own solution: a blockchain with mobile masternodes and support for several parallel blockchains. After two years of active development and testing, the project launched their main network in December 2019.

“In the months that followed the launch we have analyzed Enecuum’s technical documentation, received developer comments, and ended up focusing on the project’s mobile masternode,” head of community Max Schulte said in a statement to Global Crypto.

Enecuum uses a custom Trinity hybrid protocol based on the Bitcoin-NG and the Proof-of-Activity (PoA) consensus. A distinctive feature of Bitcoin-NG is the separation of Proof-of-Work (PoW) mining and the publication of transaction.

Bitcoin-NG has two types of blocks:

PoA (Proof-of-Activity) is a hybrid consensus algorithm that combines the elements of PoW and Proof-of-Stake (PoS). PoW miners solve a cryptographic task and create empty blocks. These ‘blanks’ will become full blocks after being signed by several randomly selected PoS miners.

Enecuum developers have significantly modified these algorithms: they added the concept of macroblock and PoA mining. In the Trinity protocol, transactions are not published immediately, but are accumulated in a macroblock.

The Enecuum blockchain is formed as follows:

Enecuum supports the creation of simultaneously running blockchains as part of a main blockchain by means of HyperDAG technology.

Shared Noncommutative Exponential Linear Logic (SHARNELL) is a smart contract based on linear logic and a set of simple operations: hashing, signature verification.

By applying linear logic and previously listed operations, a smart contract could be described as the result of an arbitrary function. This way, errors could be found and the execution time of a smart contract at the compilation stage could be estimated.

In the first quarter of 2020, Enecuum will launch the migration of ERC-20 tokens to the main network.

Enecuum has three types of mining: PoW, PoS and PoA. PoW mining is designed for personal computers. PoA mining can be done on a smartphone. PoS operations require a server.

Enecuum has a two-level referral program for PoA miners built into the protocol. Both referrer and referral receive additional 10% mining reward.

Mobile miners are required to have at least 25 and a maximum of 25000 ENQ. Owners of the 100 largest network wallets can become PoS miners.

Only PoS miners receive transaction commissions in Enecuum. Right now there are no network fees, with the transaction fee expected to be approximately 0.001 ENQ after the mainnet launch.

Mining tokens are user published tokens for PoA mining in Enecuum network. They can be used to expand the community and for crowdfunding purposes.

The project plans to create a marketplace where users will choose tokens for mining based on price, ROI coefficient, and current trading volume.

For creation of mining tokens no special hardware or software is needed. Token parameters: its name, emission period and total supply, which are set at Enecuum website.

Smart staking is an opportunity to stake with small wallets. Thanks to smart staking, PoS miners can earn more, and coin holders can receive a part of the reward for transactions on the network.

The smart staking initiator publishes a business plan online. This plan indicates how many tokens the initiator plans to collect, how much they will earn as a PoS miner, and what percentage of tokens holders will receive.

The initiator takes risks. A smart contract freezes its tokens in the amount of payments to participants in the contract. Users will receive these tokens for varying outcomes.

Smart staking allows users who cannot become PoS miners to earn on transactions . In addition, it incentivises PoS miners to work for the benefit of the network.

Enecuum has developed two mobile applications: One for a wallet and one for running a node.

The wallet is available on Google Play and the iOS AppStore. Currently however, you can only get the node app from the Enecuum website on an Android device. Minimum requirements: Android 4.4, 1GHz processor, 1.5 GB of RAM.

The two apps have a similar interface. Once you’re acquainted with one app, it’s easy to deal with another.

In order to start, you need to create or import your public/private keys.. After that, you can mine tokens and access your wallet. 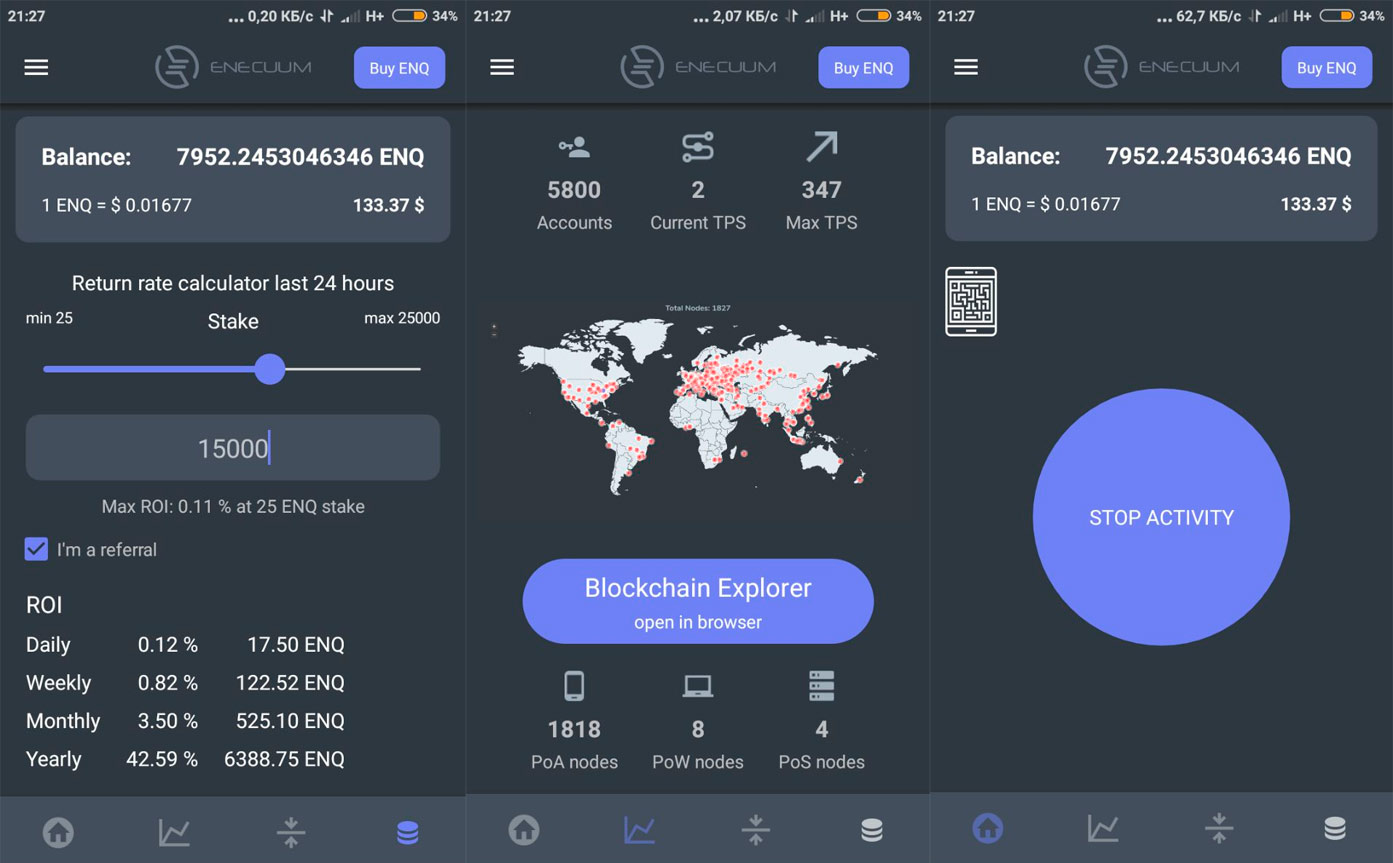 The mining application runs in the background. To make it work, you will need to allow “autorun” and “background activity”.

Nodes have very little effect on battery life. The application consumes about 1–1.5% of the charge. For comparison Telegram consumes 4.5%. 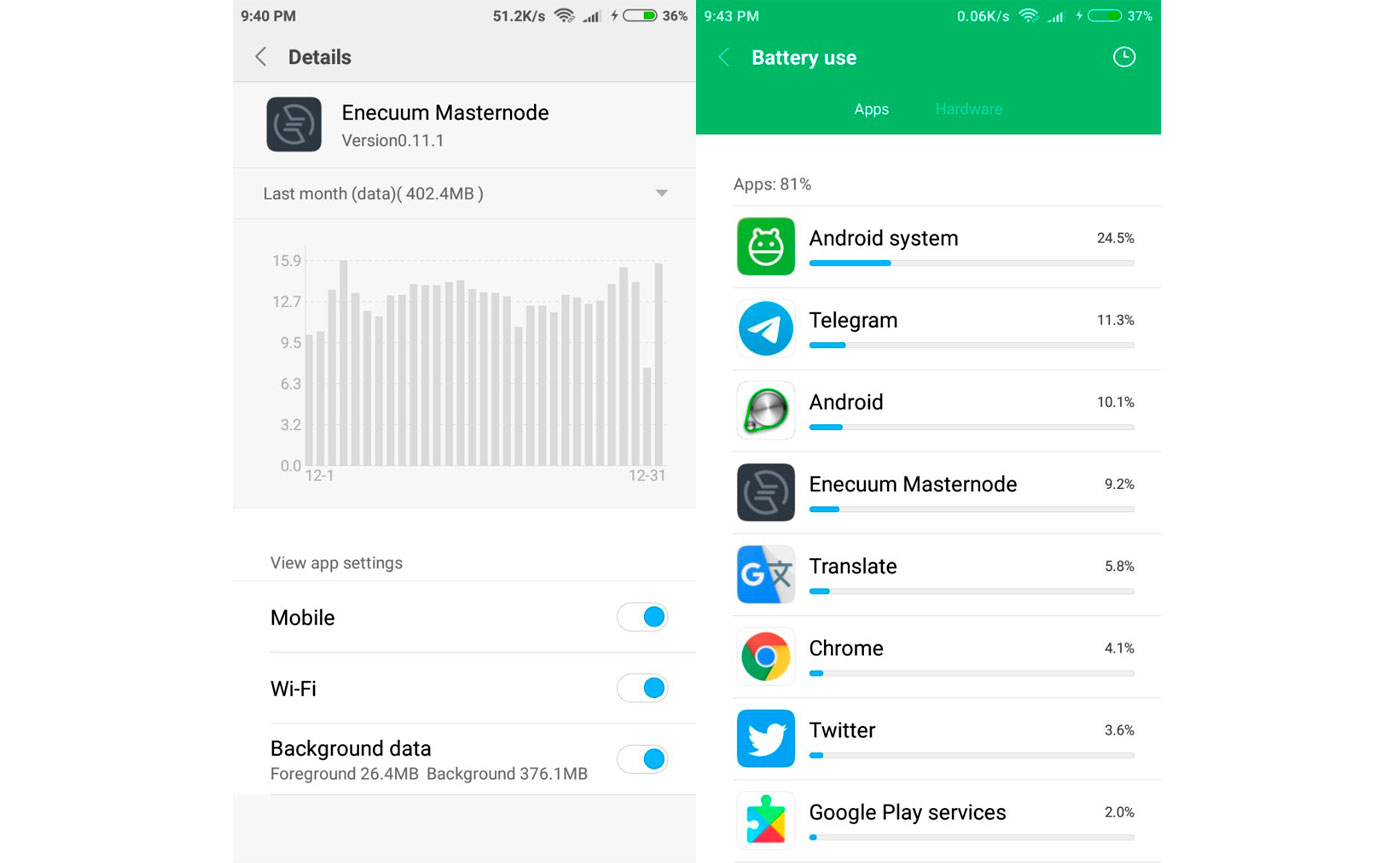 The reward for PoA mining depends on three parameters: the number of staked tokens, the computational power of the phone and the quality of the connection (the most important aspect).

The computational power of an average smartphone is enough to sign microblocks. But the phone will not receive a reward if it does not send the signed microblocks before the publication of a new key block. The main rule of PoA mining is to “always be online”!

For ten days of mining on a Xiaomi Mi5, our tests got us 22 ENQ. After the first week, we got 16 ENQ — a little more than the Enecuum forecasted in the ROI calculator. Although, the node was not online for several hours, the weekly mining yield was 1.8%.

Enecuum is an international project with its headquarters in Hong Kong.

Enecuum is a project with an interesting hybrid consensus algorithm and a low entry threshold for users.

Mining on mobile phones requires very little investment: you only need the app and 25 ENQ ($ 0.5). The Enecuum test network has more than 1,200 mobile nodes from 50 countries:

The combination of three proof algorithms is expected to circumnavigate the problems associated with the centralization of a blockchain network such as the concentration of computing power in regions with cheap electricity and the seizure of power by “rich wallets”.

Enecuum are excited for the launch of their main network, and have full confidence in a successful launch. Keep an eye on this announcement and more in the below links, or read their white paper here.

Get more info about Enecuum here:

All Eyes On Bitcoin This December, What’s Next?

What Impact Will The Bitcoin Halving On Its Price