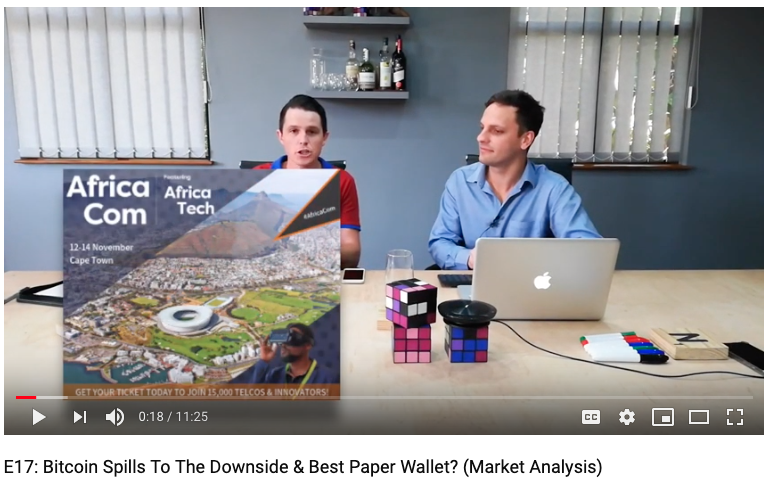 A week ago, the Bitcoin price was $11,300, and today it hovers around the $10,100 region. That’s a 10.6% decline in price in 7 days. Just when the mainstream media were starting to call it a “safe haven” alternative to traditional financial markets. 🙄 Some researchers are saying the drop is due to a Chinese ponzi scheme conglomerate selling off their Bitcoin this week. Either way, we’re probably a few years away from being past this volatility in order for Bitcoin be truly seen as a safe-haven.

There have been some interesting developments in the industry this week. Specifically news coming out of the progressive government of New Zealand, which is where we’ll start.

We’re now only 3 weekends away from the unique “Cryptofest”. Global Crypto have a team of four going down, including their founders, so be sure to join us on 7 Sept at the CTN Waterfront.

Let’s get into this week’s news. Look out for how you can win yourself R500 worth of Bitcoin!

New Zealand Officially Allows Crypto Salaries
New Zealand citizens can now officially get paid in cryptocurrency. The New Zealand Inland Revenue Service announced in its August bulletin that salaried and wage-earning workers can receive their salaries in Bitcoin or other cryptocurrencies. Although there are the expected caveats, mostly like the pay must be part of a regular employment contract and that it must be in a cryptocurrency that is easily transferrable to NZ Dollar (what will Doge earners do without Cryptopia!?), the move is a huge step forward for the industry.

While mainstream media hailed Bitcoin as a safe-haven asset, Graeme wasn’t overly optimistic in the short term. Which was confirmed as the price further weakened this week. In this analysis, Graeme looks at some key support levels to watch out for, and we also answer the question of the week “what is the best paper wallet?” – while also giving away R500 worth of Bitcoin! Find out how below…

Bakkt Finally Gets Approval
After many months of uncertainty, New York regulators finally announced this week that they have approved Bakkt’s physically-delivered Bitcoin futures offering. Bakkt, owned by the founders of the NYSE, have said that the offering will go live on Monday 23 September. The Bitcoin price jumped $300 only minutes after the news went live.

The Block have the full story

Did Ernst & Young Lose $1 Million In Crypto?
Late last year, Ernst & Young were appointed as the auditing firm to assist in the forensic investigation of Canada’s Quadriga-X Exchange controversy (where the founder allegedy died, taking the private keys with him). A detailed report has revealed the investigation has “inadvertently lost” 103 Bitcoin in the operation to date. Although not entirely E&Y’s fault, as legal firm Miller Thomson are co-investigators in the case, it is still a serious blow to E&Y’s respectable image among the Canadian public.

CoinDesk have the story