In a massive move for blockchain technology, the largest company in the world is deploying the Bitcoin-invented* innovative tech with immediate effect.

Yesterday morning, Walmart sent a letter to all “leafy green” suppliers detailing exactly what and how they are to deploy blockchain in a move to tighten up their supply chain traceability. They have given their suppliers a year to have the technology integrated into their operation. 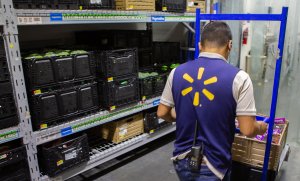 The move comes off the back of an e-Coli outbreak in Romaine Lettuce in parts of the USA in May and June this year. Researchers and grocery executives were scrambling for supply chain information to locate the source and ring-fence the outbreak. And it was here that Walmart saw the opportunity to drastically reduce turnaround times.

In this recent example, it was taking up to 7 days for a suppliers to produce the required data. Had this data been integrated onto the blockchain, that time would have been reduced to under 3 seconds. That’s correct, 3 seconds.

Walmart have been consulting with IBM on how to digitize the tracking of their supplier’s value chain, and the tech firm have produced a blockchain solution which makes the data immutable (unchangeable/incorruptible), transparent, decentralized, and entirely accessible by those who need it most (in this recent case, the health researchers desperately trying to reduce the impact of the outbreak and locate its source).

This latest move by the world’s largest company shows just how important an invention blockchain actually is. The biggest question cryptoasset enthusiasts get asked is: what is its use-case? The underlying technology of a cryptoasset, blockchain, is worldchanging technology because of its internet-like ability to produce transparent and immediately-accessible information. This deployment by Walmart clearly highlights the power of blockchain technology to build a better world.

This is only the first of many.

You can read the entire story on Walmart’s official blog post here.

*Bitcoin-invented: The immutable, transparent & decentralized technology known ubiquitously today as “blockchain”, was first introduced in the Bitcoin whitepaper when inventor(s) Satoshi Nakamoto referred to his distributed ledger as “a chain of blocks” and a “chain of digital signatures”. It was then referred to as “block chain” by Nakamoto’s friend, Hal Finney, in subsequent emails about Bitcoin’s underlying technology.