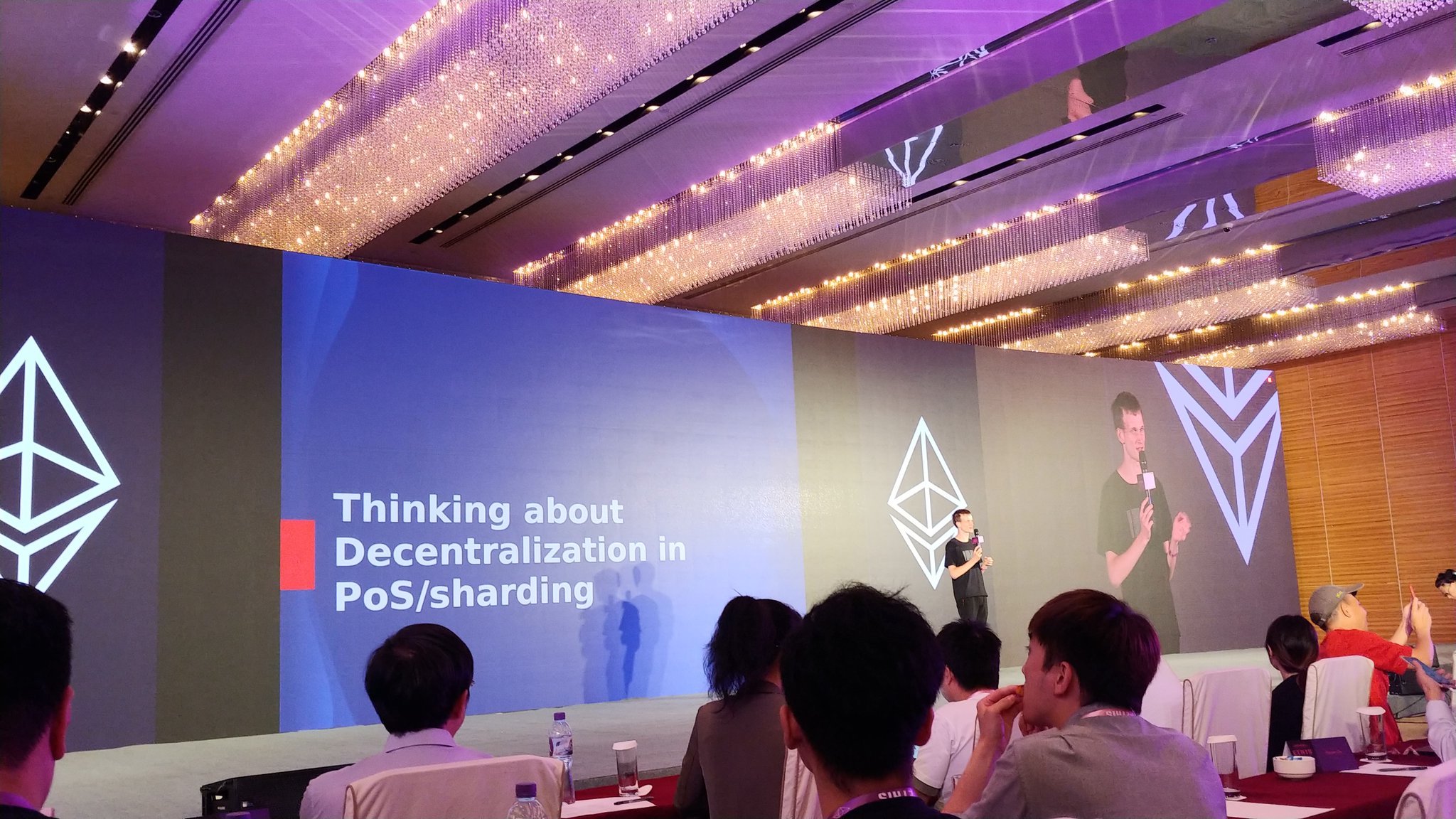 Saturday (8 September) saw a lot of noise coming out of the Ethereum community. And that’s not because the price of the platform’s token, Ether, dropped from $220 to $190 either. It’s because the Ethereum Community of China hosted their annual “ETHIS” (Ethereum Industry Summit) in Hong Kong.

The summit centred primarily around the proposed protocol changes being explored by the Ethereum community: Proof of stake and sharding. While these changes are months away from being implemented, summits like ETHIS are imperative to the community’s preparation dialogue.

The summit was covered by the likes of Bloomberg and attended by government officials, and was concluded by a provocative address by Ethereum’s founder, Vitalik Buterin. The down to earth, somewhat introverted crypto celeb continues to impress developers and the public alike, as his dedication to the Ethereum platform is more focused than ever.

“Decentralization is not the final goal. Instead, it is a means to an end”. —@VitalikButerin at #EthIS

Vitalik indeed seems more focused than ever before on producing a product that is truly decentralized and yet entirely sustainable. He emphasised that the new upgrades to the protocol must not, in any way, jeopardise the decentralisation of the network, as well as its scalability. This emphasis on true decentralisation and scalability have led to further tweaks to the proposed upgrades, which continue to delay their implementation.

And yet, despite a remarkable address from a truly remarkable young man (born in only 1994!), the Ethereum token (Ether) took a beating not long after. The price of Ether, already under immense selling pressure in an intense crypto bear market, plummeted from $219 to $189, leading doubters to speculate on the platform’s future.

These doubters, however, seem to be influenced only by price action, and many analysts are pointing to this selloff being induced by ICO companies liquidating their raised Ether funds in order to increase further operating capital, and nothing to do with the ETHIS summit.

The weekend’s price versus community action again showed that fundamentals don’t seem to affect token value in these bearish times. The weekend also showed that the Ethereum community have no interest in the token’s price anyway. They have interest in only one thing: Building a decentralised world.

Summit attendees have praised the function, with many saying it exceeded their expectations.

I came to #ETHIS with High expectations on Scalability

Expectations have been exceeded by the creativity on OFF chain solutions and the next Token Standarisation: Security Tokens

Just as the dust of the event was starting to settle, Vitalik was interviewed by Bloomberg News, and in the interview with Eric Lang, he made an interesting comment about crypto adoption. He pointed at the average user on the street, and that many of them have heard of Bitcoin and cryptocurrency now, indicating that a ceiling in the market has very likely been reached. There won’t be the mass rush by the average consumer on the street to “get in before everyone else does”, because many of them would have already dabbled in it.

You can watch that video interview on the Bloomberg site, here.

Whatever happens, it is clear from summits like these that the best blockchain developers in the world have very little interest in price, and only want to be part of building something truly worldchanging. Whether that “something” be Ethereum or an alternative, there is no doubt that what Vitalik and his community are building will be a significant part of this industry’s history.

Special thanks to Eric Lam, of Bloomberg, for his assistance with images and input for this story. You can follow Eric Lam on Twitter here.
This post’s featured image was taken by Eric Lam, where he originally posted it to his Twitter page. It is used with permission.