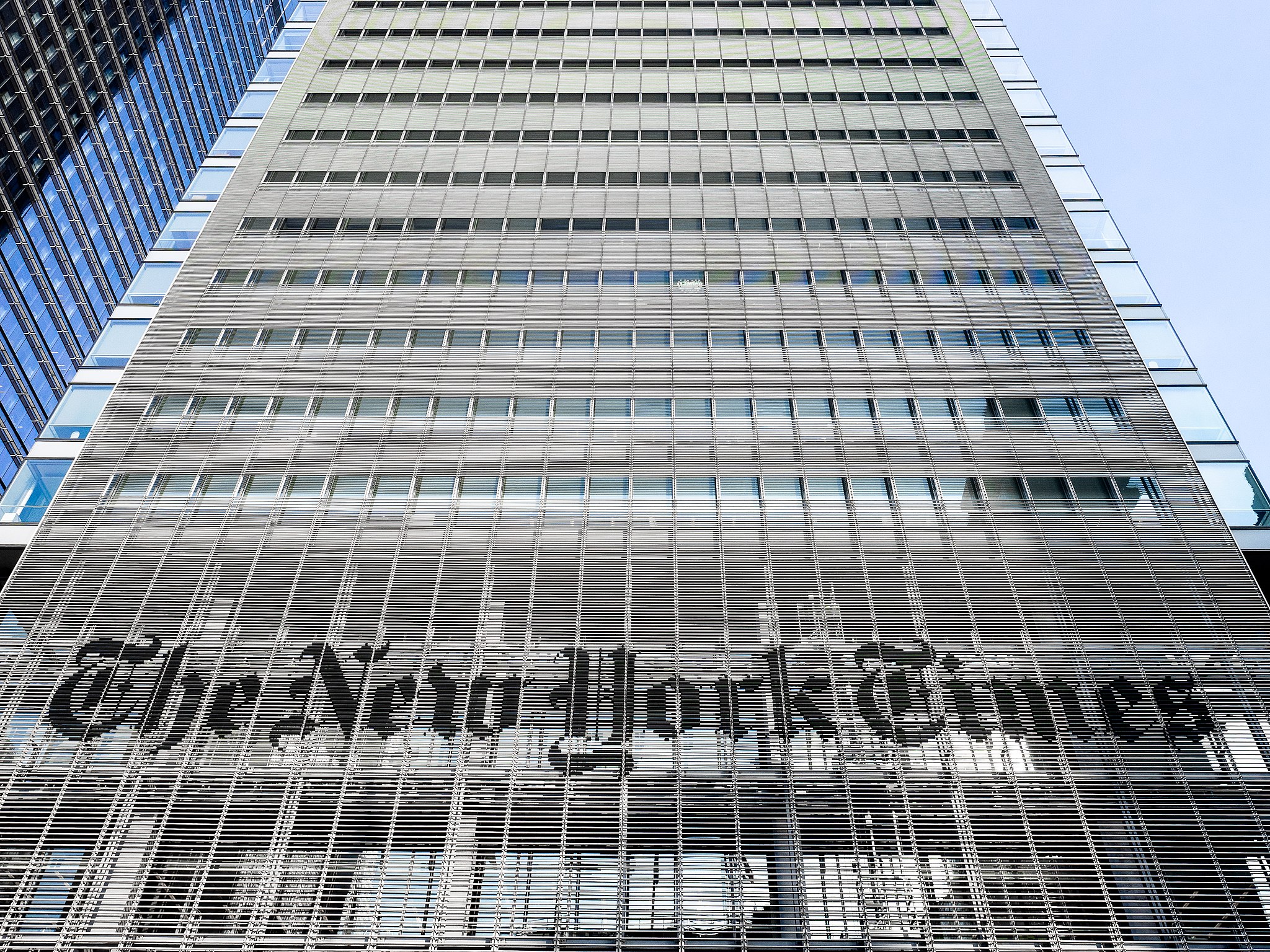 As Executive Editor of an exceptionally small media outlet based on the obscure East Coast of South Africa, I do not expect to engage in actual, responsive dialogue with the media behemoth that is the NY Times. Truth be told, as a writer I have always held the outlet in the highest regard, and even based much of the UI of our sites (SA Crypto and now Global Crypto) on their layout (Body and header typeface  and typesetting etc.)

But just because I am an admirer of the Times does not make it exempt from my criticism. Having said that, this criticism isn’t necessarily directed toward the outlet itself, but rather of a specific piece.

I penned this thread on Twitter in order to provide a response for many Twitter users who find their article by happenstance in hope they would see that the article in question was a weak one.

Despite our obscurity, this is a response that I believe needs to be published. I hope it is considered by some, and perhaps shared to reach an even slightly wider audience.

As I mention in the thread, this is a horrifying global event that cannot be understated or taken lightly. But cryptocurrency cannot become collateral damage in the firing line of all devoted to freedom and diplomacy. Digital assets and their underlying blockchain technology are notably groundbreaking, and should be reasonably defended in the face of speculation.

Herewith what was responded to the original story which again can be found here. I have added auxiliary points and redrafted the formulation to fit the format.

The story titled “Russia Could Use Cryptocurrency to Blunt the Force of U.S. Sanctions” published by the NY Times is an incredibly poor representation of journalistic integrity. It is nothing short of weak. Especially considering a cryptoasset “specialist reporter” (@yaffebellany) was a co-author.

The story heavily serves the narrative that “cryptocurrencies are dubious and unprincipled”, in a partial approach, with questionable facts.

While we, as a cryptocurrency news outlet, do not play down the fact that circumventing international sanctions is a serious transgression, we also have a duty to defend the accused technology when it is misrepresented in such prominent outlets.

This is certainly a calamitous international event, and the use of blockchain technology to cushion allied responses would be unfortunate, but it is for these very times that outlets such as ours, with astute expertise, should be providing clarity.

In the same way that the Italian use of reconnaissance aircraft pre WW1 should not have tainted the image of aerospace technology, this kind of use of blockchain tech and digital assets should not taint their legitimate possibilities.

In response to some of the clear inaccuracies in the Times’s article, we provide the following:

1. The headline is an accusatory warning
This approach sets the tone for the entire article.
Each quoted expert provides hypotheticals of what is possible, and not what has actually happened to date, with no evidence of actual examples of serious trade performed via
cryptocurrency that would indeed rival that of traditional finance rails.

“But if banks are the eyes and ears of governments in this space, the explosion of digital currencies is blinding them.” This is blatant speculation.

This approach is poor journalism and downright irresponsible, particularly taking into account the wide coverage the story is receiving.

Yes, ransomware attacks do seem to be originating predominantly from Russia and are an increasing challenge to global IT security. This is acknowledged.

But only $541m was generated by all known ransomware attacks globally ($400m of that allegedly went to Russian hackers) in 2021.

But even if we used conservative estimates that Russia is set to lose 1% of GDP due to imposed sanctions, that would mean they would need to recover approximately $15 billion.
If Russia, and assuming all ransomware hackers are government employed (which they are not) had to double their ransomware revenue, they would only generate $800 million in 2022, which is a meagre 5% of lost GDP.

Again that is calculating the lost GDP conservatively, with the assumption that all Russian ransomware hackers are government employed.

3. Ransomware has nothing to do with crypto’s facilitation in evading sanctions

The majority of the article’s hypothesis surrounds ransomware. Besides the above points, it’s important to note that ransomware is not directly empowered or fuelled by cryptocurrency. Instead, cryptocurrency is merely the easiest way for hackers to get paid. Before the invention of Bitcoin in 2009, hackers used a myriad of payment methods such as prepaid vouchers, Paypal, and others. Ransomware attacks would survive and thrive without the existence of cryptocurrency, so laying the blame for ransomware hacks squarely at the feet of digital assets is inept journalism, misguided, and prejudiced.

4. It is moot to use Hydra as an example
Using Hydra as substantiation for your charges is extremely weak.
With $1 billion in sales (profits/fees not even taken into account) Hydra’s market place cannot even be considered a drop in the ocean for Russia’s GDP reclamation endeavours.

Whether private transactions are a virtuous ideal in modern society is still being debated. But none can argue the virtue of privacy in general (see Human Rights Charter article 12). Understood, private transactions do pose greater security challenges than other forms of privacy, but a larger conundrum is the determination of transactions as legal or illegal (see @RealRossU story). Making transactions openly transparent is an easy way out for authorities.

6. More sensationalist, speculative, hyperbole:
“That would allow businesses to trade with Russian entities without detection.”

The Times provides no technical mechanics as to how such businesses would engage in this kind of trade. The speculation about businesses “nesting” is also mere conjecture and lacks any substantial demonstration.

7. Iran mines cryptocurrency to mitigate sanctions
A weak (and unsubstantiated) statement to fit the narrative of the story’s allegations.

How much is Iran mining?
Does it come anywhere close to covering their sanctions-imposed losses?
Besides the fact that cryptocurrency mining is entirely legal and a legitimate form of commerce.

Granted, a link to an Elliptic article is provided. But it too pushes the envelope of speculation. A statement like “The Iranian state is therefore effectively selling its energy reserves…” is a dangerous one. The use of the term “effectively” questions the statement’s credibility. Not to mention the fact that the article claims that the most Iran can generate is only 4% of their oil exports. That means that Iran needs to make up 96% of its sanction-imposed losses outside of cryptocurrency.

8. North Korea uses ransomware to fund Nuclear program
Admittedly, the Times provides a Reuters link. But remarkably the story provides no statement whatsoever about ransomware! And instead references North Korea hacking cryptocurrency exchanges (an entirely different modus operandi) as partially funding their nuclear program. This of course all outside the fact the alleged UN report has not been seen publicly!

The article is profoundly unjust towards those involved in the cryptocurrency industry. The NY Times of all publications are well aware of how seriously the USA takes sanction-evasion, and to link cryptocurrency to being a serious threat to these sanctions is not only irresponsible, it is unwarranted. Let alone the case I have just presented of weak journalism being given prominent exposure on such a world-leading platform.

Again, I understand the severity of the situation at hand. It is of global consequence. I am also keenly aware of the nuanced dialogue required surrounding the digital asset regulatory landscape.

But with this in mind, I and my team remain absolutely opposed to the premise of the article.

Yours in journalistic integrity,