This opinion piece highlighting the challenges that inflation presents society today is written from a South African perspective:

As a millennial, I am often regaled by the older generations and their tales of the “good old days.” A story that keeps coming to mind is from a member of my family who is now in their late fifties. They would often tell us of when they were a child, their parents would send them to the local store here in South Africa with only R2 (about $0.15). With nothing more than this R2 in their pocket, they would proceed to get the bread and milk they were sent for, a pack of chips, a soda, and still have some change left over! No matter how many times I hear the story, it never fails to leave me in disbelief. A person today wouldn’t dream of walking into a store with just R2 in their pocket and expect to walk out with anything substantial.

As an interesting side note, for years I thought it was just a R2 coin, until one day I was corrected by another member of this generation. It was in fact a R2 paper note, and on the bottom of that note was a message, that read “pay to the bearer in gold.”

This gold tethering broke down in 1971 with the Nixon shock, along with the rest of the world’s currencies. Many attribute the phenomena we are going to explore further, as a consequence of this action. To gauge the full effect of these anecdotal tales that I’ve heard time and time again, I decided to dig a little deeper into some of the data.

Our local trips to the local grocery outlet seemed like a logical place to start this investigation. Bread, milk, eggs, oil and other staples are items that appear in almost all our shopping carts and baskets. In the 80s, a trip to the local outlet to purchase the grocery list below, would cost us here in South Africa just R17,89 ($1!). The same grocery list today, would cost just under R350 ($21). (see table below for more) That means, in less than 40 years, this basic grocery list has increased almost 20 times (or 2000%) in cost! 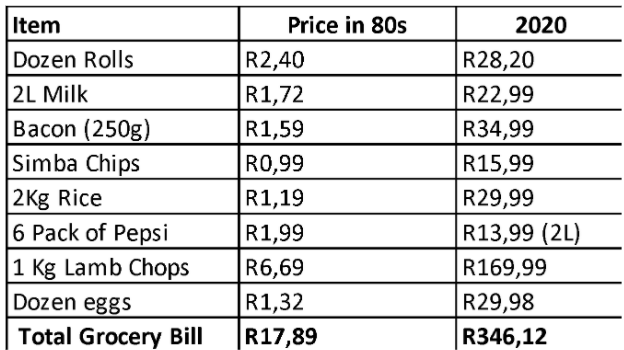 South Africa’s favourite burger joint is a fast food outlet named “Wimpy”. I have many fond memories of weekend breakfasts here – dousing my chips with the familiar red and yellow bottles and tucking into a Dagwood sandwich. This is a sentiment many South Africans will be familiar with. But how has the price of creating these memories evolved over the years? After managing to locate a Wimpy menu from 1983 (see image below) I was able to discover the price of a cheeseburger and fries was just a measly R2,30 ($0.14!) in 1983. Fast forward less than 40 years and the very same meal costs R64,90 ($3.82). In less than 40 years the price of going out for one of SA’s favourite meals has gone up more than 28 times (2800%)!

Perhaps the apex of achievement for every adult, is to purchase their own home. A place they can settle down, raise a family and build a life. Your house, my house, every house, is filled with a plethora of memories that stain our very being. Many of us were lucky enough to not even have to spare a passing thought in the costs involved in putting a roof over our heads as a child. As adults however, we are keenly aware of just how expensive purchasing and maintaining a household is. So how do these current costs stack up with those of our parents?

The effect of inflation has undoubtedly been great over the decades, but in less than forty years, groceries increasing by 2000%, take out by 2800%, a normal car by 3800% – this is just ludicrous! Beyond just these, the cost of owning a home has gone up over 700% between the time a child was born and was ready to buy their first home at 25.

Now let’s take a look at how income in South Africa has evolved over the same general period. According to the World Inequality Database, the average income in South Africa, between 1986 and 2018, increased just over 16 times, or 1600%. In 1986 the average annual income for a South African citizen was R7 357 ($731), and this increased to R121 428 ($7100) by 2018. Had we not taken a look at the items above first, this may have seemed really impressive. In actual fact we see this increase hasn’t kept pace with a single area of what we spend our income on.

This accounts for the gradual squeeze we seem to feel in our wallets, year after year. It’s small enough that the average consumer, like you and I, seem to shrug it off. However, over a decade or two we begin to see just how significantly these “inches” can change our standard of living. I don’t know about you, but I shudder to think what my children and their children will be paying, just to maintain a good standard of living.

Personally, I’m glad that Bitcoin has offered us a way to exit the system.

Image by Steve Buissinne from Pixabay